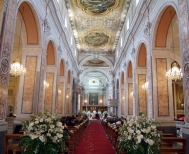 Built on an oratory laid on the St. Anthony sepulchre, patron saint of the city, the Basilica is one of the most important religious buildings in the Sorrento city.

The inside architecture of the Church shows three aisles divided from twelve columns made with different marbles coming from ancient Sorrento buildings of Greek-Roman age.

Inside the basilica, in the crypt made again in 1753, are kept the Saint remains who had taken shelter in the church during a Longobardic
invasion.

Besides numerous and precious elements of various ages the Basilica puts up valuable paintings by Giovanni Bernardo Lama and one by Giacomo del Po of the 1687.

The St. Anthony Basilica, in the heart of Sorrento, presents on the right an enchanting portal of the XI century.

In the Sacristy of the Church are unique rests of a majolica floor and a Neapolitan Nativity Scene of the eighteenth century belonging to the Sammartino School.
Besides the Sorrento Patron Saint remains in the Basilica is possible to admire numerous ex-vote, most of them given by sailors escaped from castaways.

In the atrium of the Church there are two ribs of cetacean as a keepsake of the famous miracle of the Saint: the Saint is said to free a little boy from the mouth of a whale drawing out him safe and sound.
To testify this wonder the Sorrento population put these two whale bones at the entry of the religious building erected to honor the Saint.