Used in ancient times to define the borders between a country and an other one, the deep valleys are characteristic beauties to visit in the Sorrento Peninsula.
In Sorrento Peninsula are at least five of these valleys, modified in the centuries by the men necessities.
The best preserved "Vallone" is the Mills Vallone in Sorrento: still today it is possible to admire intact the central part of the deep valley stretching near Tasso Square and surrounding the rocky spur on which Sorrento rises.

The Sorrento Vallone belonged formerly to the Tasso family and then to the Correale one.
The Vallone is named after a mill that was used up to the beginning of the Twentieth century and which was supplied by the waters coming down from the hills and by the spring waters and which was put next to a sawmill for the workmanship of the wood used for the production of inlay manufactured articles. Other peculiarity of the Vallone was the presence of a public washhouse.

After 1886 the Vallone was abandoned when water began to fill the last part of it. 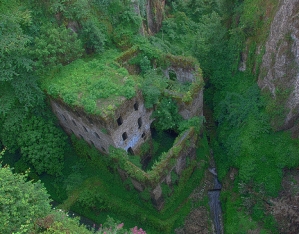 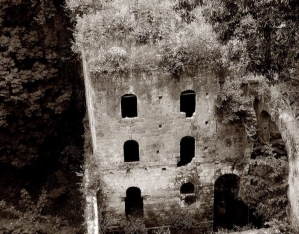